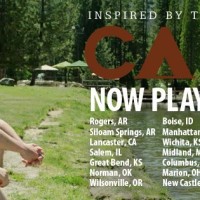 I’ll be the first to admit that my initial interest in seeing CAMP when I first heard it would be coming out was because it came from friends from college and it also features a couple of people I know in the film either in front of the camera or behind the scenes. Roebuck Media had produced a charming romantic comedy a couple of years ago called Coyote County Loser and I wanted to support their second venture as well.

This new movie was going to be much more serious as it dealt with child abuse, kids in the foster care system and even adults living unhealed lives. (by the way, it is about kids at camp but it does have a PG-13 rating for violence, language and really grown up situations that might be …should be…scary for little ones).

CAMP is a movie that has elements of several true stories woven throughout the plot that centers around a camp that welcomes kids from the foster care system for a week of fun, positive adult attention and just… heart healing. (Stay through the credits to hear the real stories. You won’t regret it.)

Eli is a 10-year old boy whose mother dies of a drug overdose and his “around sometimes when he feels like it” father abuses him. After being beat up on his birthday, the boy is taken to a residential facility that is basically a little bit better than a prison for kids. Eli goes from being a hopeful, fairly normal seeming kid to someone who is angry, scared and distant. Enter Ken Matthews, who is an investment advisor who seems like he would do just about anything to close a deal. He volunteered as a counselor at this camp to impress a client and got in way over his head when he was assigned Eli.

During most of the movie, I want to slap and essentially beat up Ken Matthews. He’s a jerk. He’s selfish. Then I realized, he’s hurting…just like Eli, who was also kind of a selfish pain.

I won’t spoil the movie but a lot happens that leads Eli and Ken to start to bond and come to a better understanding of each other. It wasn’t saying all is going to be OK, the plot wasn’t saying that a healthy ending takes away all the pain that both had endured. It says that there’s hope. It says that loving a child will make a profound difference in both of your lives.

I left with the feeling of “people who endure abuse and heartache don’t need fixing. They need healing.”

Changing my own mind

I knew it would be interesting, but I never imagined that it would touch my mind and heart as much as it did. Even almost two days later I’m still absorbing the impact this movie had on my own heart and what I hope it does for everyone else who sees it. As awful as this will sound to some of you, I had a somewhat distinct view of how kids in this situation should be handled.

Abounding compassion, yes. Understanding of negative behavior brought on by their abusive past, yes. But I think I always thought that a kid would feel better if he or she had rules, had boundaries. Like the abusive parents never set boundaries. In some ways, that is still true in that yes, all children need boundaries to feel safe. But boundaries are different than rules and from what I came to realize in the movie, many abused children did not lack in rules. They lacked in healthy rules and boundaries. Eli, for example, wasn’t really allowed to leave his room that much. Kids in these situations aren’t supposed to talk about their home life. They live with rules that are designed to protect the selfish parents, not the child. Healthy boundaries help the child grow into a healthy adult, not help the stupid adults hide their bad behavior.

What I saw in this movie was a gentle guidance towards healthy behavior, but understanding that the acting out was essentially how the child was taught to behave and at least initially, was not really a “choice” that was being made. Yes, I know that all that we do is a choice. But when someone has certain fears, abuse, anger and so many other negative things ingrained in them, that is how they are taught is the right way to act. They need to be guided, not treated with a heavy hand.

You need to go to CAMP

To find out more about CAMP (which will also be released on DVD this year I’ve heard), visit http://thecampmovie.com/