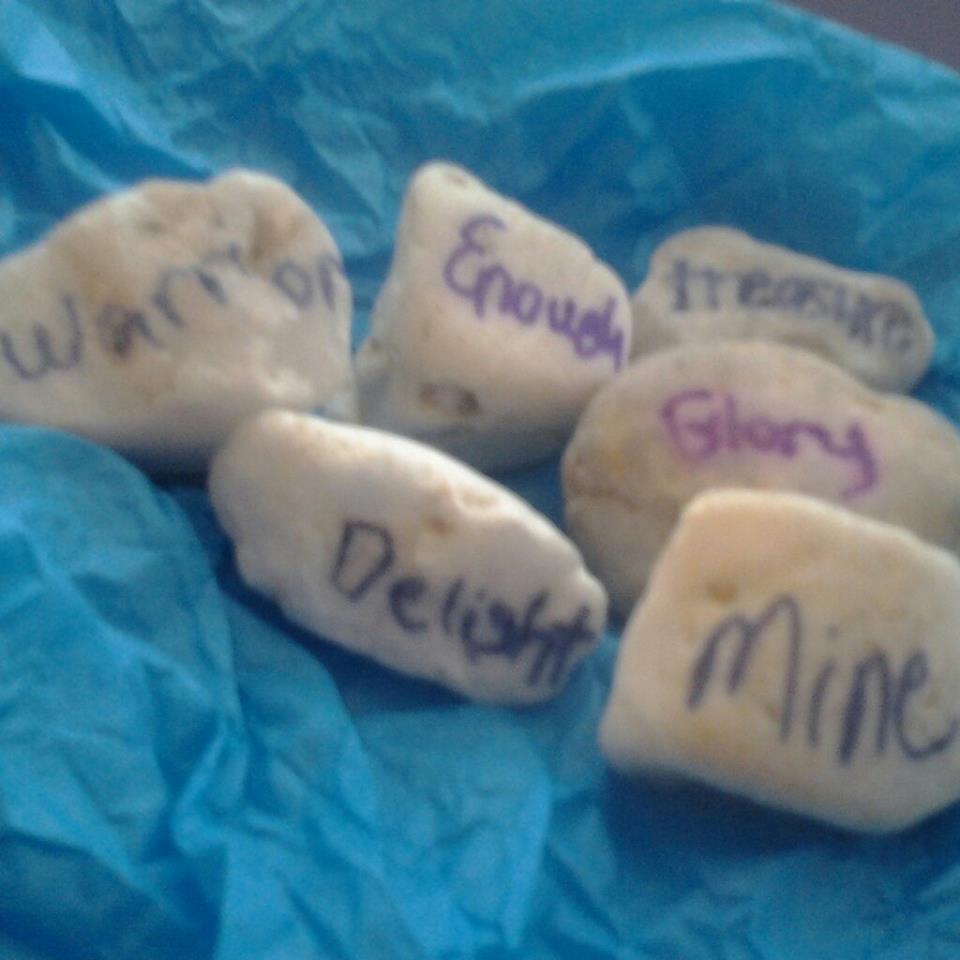 “And I will give to each one a white stone, and on the stone will be engraved a new name that no one understands except the one who receives it.” -Revelations 2:17b

The names God has given me as of this writing October 2013.

Most of you know that my name is Jamie (after all, this blog’s name is Jamie’s Thots, right?). But over time, I think we gain other names. Names that we call ourselves or what other people call us. Or maybe not what they call us, but ways that we feel defined that provides a different name for ourselves than how God sees us.

And in our broken, sinful world, if we are truly being honest with ourselves, most of these “names” are not good. They are filled with criticism, shame or some other kind of negative emotion. This is even true for names we feel we get from people who love us. It’s not necessarily what they’ve specifically tried to convey, but it’s the name we’ve adopted because of how words made us feel.

I think sometimes I’ve come to hate sentences that start with the words “you are” or any variation. Don’t worry, you don’t have to stop using that phrase with me! But think about it. Anything that follows those words is a way of describing the individual either how they are as a person, how they are physically, how they are in their current or perceived state of being. It is very easy for the person on the receiving end to take those “you are” statements as definitions of self rather than statements of immediate fact.

I remember a time in my life about two years ago when I felt like everyone in my life was trying to define me. I was always told how “literal” I am, thus making people have to alter how they communicate with me. I was also frequently told what kind of individual people perceived me to be and I felt boxed in. Even when the comments were positive, I felt defined. And I felt like people had the constant need to share (read: push) those definitions on me.

I will stop real quick and say that a major exception to what I said above was in my home. I would often tell my husband, “thank you for just letting me be. You don’t ever try to define me or tell me how I am or who I should be. You just let me be who I am without comment or criticism.”

Anyways, back to the point!

At the Captivating Heart retreat, we do this amazing ceremony towards the end where we learn about how God has different names for us than how we see us. How he sees us is beautiful. It’s blessed. Each person has their own purpose, their own names. It is during the White Rock Ceremony that we are invited to take a simple white rock and write with a Sharpie pen the name we feel God is telling us we have. The ways he sees us.

Last year I was frustrated because I didn’t feel an immediate answer from God. Two friends shared what they believed God was telling them that he sees me and I cherish those, although I don’t know if the same names were ever repeated to me. (I was really sick at the first one and in a very emotional state so it was perfectly natural for me to not get a full sense of what God was trying to tell me.)

One clarification: I don’t mean to make this sound like a magical “struck by lightning moment.” God can and does give us new names at any time and it’s usually a whisper not a big emotional “come to Jesus moment.” It’s simply a message from him that shares how he sees us and defines us. I’ve received several new names over the last year and a couple more were revealed to me at the 2013 retreat. I have each of them written on a white rock that I keep nearby so when I start being reminded of the old names, I can be reminded instead of how God sees me.

That’s the point of writing the names on the white rock-it’s a symbol but it’s also a physical reminder of the names God gives us. I’ve heard of some women who keep their rocks in a clear jar near their bed and they read the names every day as a reminder of who they are in Christ.

I’m enthralled by my rocks because of the names that are on them. They are an assortment of strong names that are a blend of amazing strength and quiet boldness. I know these are blurry (it’s amazing how inanimate objects like rocks can still be hard to photograph!). To help you out, I’ll translate. My names are: Warrior. Enough. Delight. Glory. Mine (coming from God). Treasure. (How amazing and awesome are those?)

The story of the Captivating series:

The idea of an identity crisis is a dramatic, sometimes overused concept in my opinion. That is, until you experience it. When you go through having that shift in your understanding of who you are, what you are and how you are, it does in fact feel like a crisis. I’ve struggled to understand my identity in recent years as all my preconceived notions of who I was or what I should be have been shattered in one way or another. I quickly (relatively) accepted the idea that my identity is in Christ, but understanding just what that means has taken much, much longer.

I feel that through attending Captivating Heart in 2012 and in 2013 serving on the planning committee, I’ve been blessed with some of those answers. Do I have it all figured out yet? Of course not. But I feel that I’m being blessed with a better grasp on the concept of identity and who I want to be. In the coming weeks and months, I will write more about these revelations and share them with you in hopes to not only share my blessings, but to hopefully help others who are struggling with the same concepts.