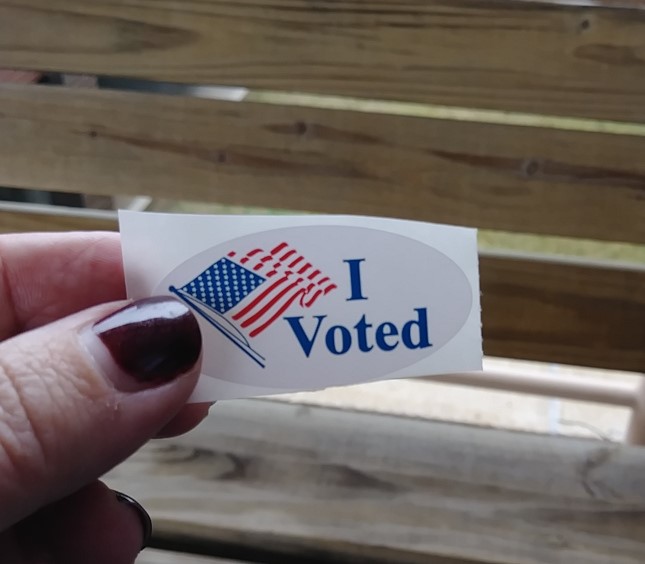 I remember when I turned 18 and had the first opportunity to vote. It was a privilege. A right. A duty. I was raised to be a responsible, educated citizen and to know why I was voting for whom and for what I cast my ballot. Over the years, I’ve been registered in two different parties despite my belief systems not really changing that much (long story). I’ve missed only a couple of elections and none of the “big” ones.

Twenty-two years later, I am still adamant about my right to vote. I think voting is valuable to most citizens who “get it,” but for those of us who represent populations that society has seen as “less than” it feels even more momentous. I’m both a woman and a person with a disability. Both groups have a long history of being told what we are allowed to do, think, or say.

Women had to fight for the right to vote and we still have to fight to be seen as an equal. People with disabilities have been wrongfully institutionalized, sterilized, and left to die. Some of that still hasn’t changed, by the way. We are often dismissed as a burden or an advocacy project for some people to champion.

Ironically, at least in the more recent elections, it’s been those who claim to champion people like me who have been clear in who they think I should be voting for and how I should believe. I pay it no mind, I still do my own research and vote my beliefs. Sometimes I agree with them, often I do not. I will never lose sight of the value of being free to use my own mind and make my own choices.

I personally believe that this election, which I participated in as a voter on Monday, is just as important to our future as all the others. Quite frankly, those who are declaring it the most important are those who are upset about the last election. That’s OK, we’ve been here before. Whichever “side” is upset at the time always makes extra noise about how important it is to vote. I stand by my belief that all elections are important. You want change? You need to vote. You want the same to continue? You need to vote. Not a hard concept.

I’ve tried hard to not participate in the political vitriol that I see online from people I usually see as my friends. And make no mistake. I’m aware it’s coming from people from all sides. But it has taken its toll. I think we are all weary, angry, and just generally spent.

That’s what made my experience in the voting line such a pleasant surprise. With the impressively high voter turnout in the early elections, the lines have been pretty long at times. Of course, me waiting until the last day of early voting meant I had to go to the only polling place that was open, and a couple hundred people had the same idea. The line was wrapped outside and woven throughout the building.

I didn’t hear one angry, argumentative word. We were citizens who were exercising our right to vote. We were likely casting a wide range of ballot choices, but in that line, we were united. We proved that when you see each other as people instead of a political enemy, stuff gets done.

Oh, and that sticker you get when voting? I decided I wanted to celebrate for longer than I wore the t-shirt I wore Monday. That sticker is on the back of my cell phone so I can be reminded every day.