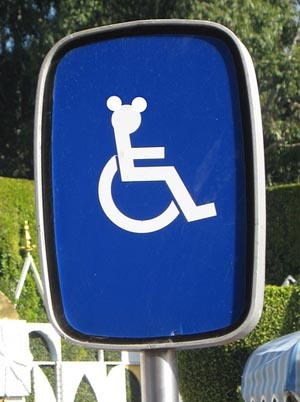 As kids, my brother and I were blessed to experience both major Disney parks-Disneyland in Anaheim, Calif. and Disney World in Orlando, Fla.

As a person with a disability, I was considered to be a ton of fun to take to these parks because of their long-standing policy of allowing people with disabilities to go to the head of the line for all the rides.

This rule is changing as of Oct. 9, according to various news reports quoting Disney officials. Apparently there’s been a big problem with people either faking a disability or hiring a disabled person to pose as a family member so that people who don’t technically qualify for the special consideration on the lines can jump ahead of everyone.

People with disabilities will now be required to check in at some office and get scheduled times to appear at the rides.

A bit of background

I think technically the rule was that it was the person with a disability and one member of their party, but most ride operators realized it was lame to split our family up so they let us all on.

This was to help them stay out of the elements and not have to stand in long lines where they would tire more easily than an able-bodied person.

Most let us stay on for a second ride because it would be easier and quicker for all involved to just let us stay on instead of stopping the ride for the slow process of us disembarking then getting back on the ride later.

So what does Disney’s new rule solve?

I get why Disney wants to change the policy. Abuse of a privilege is wrong and it makes it unfair for those who are following the rules, disability or not.  Disney isn’t trying to make life more difficult for people with disabilities, but that’s what happening.

My question is, how does the new policy change anything? People who are trying to cheat will go to great lengths to do so. No proof of disability (like a doctor’s note-I doubt I would ever be asked to demonstrate) will still not be required to get the special pass with admittance times for each ride. Although it’s not the same as having the ride stopped in front of a long line of people, there is still special consideration. I don’t see that unqualified people will suddenly be deterred from their shenanigans.

I do see that the timed admittance could be a problem for some people with disabilities. What happens if something comes up health-wise and the appointment for that ride is missed? Life is very unpredictable when you have a physical impairment and sometimes schedules just don’t work.

I don’t know what Disney did to decide on this new policy but I have to wonder, was it really that big of a deal to assume that people were telling the truth and let them on the ride? If it was discovered that they were being dishonest, ban them from the park. Forever. Don’t make it more difficult on those who are being honest and following the policy.

And to those who are posers or allowing your disability to be “bought” at the highest price: shame on you.