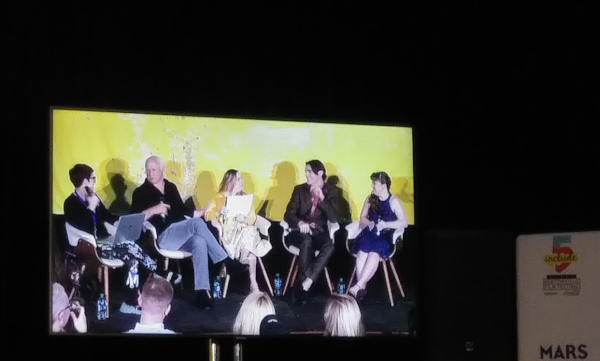 Last weekend, I was able to participate in discussions about how both women and people with disabilities are portrayed in society as evidenced in various forms of media. The Bentonville Film Festival just wrapped up its fifth year in Northwest Arkansas and I took time to attend two events that address the role of both these cultures.

On Friday, I attended the panel Willing & Able panel that featured three actors with various disabilities, and a film producer who works with people of various intellectual disabilities. On Saturday, I both attended and sponsored the Women In Film Arkansas organization’s mixer.

I am writing a blog that details my thoughts on the work WIFA is doing on my business blog and will link that as soon as it publishes. For the sake of my personal blog here, I wanted to focus on disability representation and how it was discussed in the Willing & Able panel.

As I mentioned, the panel including people who are both in front of the camera and behind it. It also included people from both the able-bodied and disability communities. I took notes but did not always get the name of who said what. Most of my notes are from one actor (RJ), but he was also the most vocal.

I could write all day on this topic so I’m going to try and pick out the key points that stood out to me.

A brief look at the issue

“People with disabilities are just that, people,” she said. “We deserve accurate portrayals.”

Something I’ve noticed for decades is that when most people talk about diversity, what they mean is race and usually gender. Sometimes sexual orientation. Most the time, disability is not included in that discussion. I’ve been pleasantly surprised over the years that BFF has made an effort to include disability although, to be frank, it still feels like a token compared to the emphasis on other groups. For example, I am pretty sure this forum was the first discussion dedicated to disability in five years. But it’s a start.

The issue of why disability is not automatically deemed part of the diversity equation was one of the next issues to come up.

“I don’t know. I don’t get it,” Joey Travolta said. “I’m trying to break down barriers.”

RJ said he thinks part of the issue is that the lack of diversity is a reflection of people’s perceptions about disability.

“People don’t want to have the idea in their head that they (could be disabled),” he said. “I have this idea of ‘I don’t want to be like that.’ But the truth is, anyone can and will be affected by disability.”

RJ continued to say that people have the idea that disability only means “can’t” but that’s because people only see it from the diagnosing doctor’s perspective. Instead, they should try seeing the lives of those who are thriving despite their medical condition. This concept is why I try to be fairly open with parents of children with Spina Bifida. I want them to see the possibilities, not just the obstacles.

The panelists agreed that while there may be challenges, people who are truly passionate about something can be what they want to be somehow. Case in point: Joey and all three actors are part of a new movie coming out (Carol of the Bells) that features a 70 percent disabled cast/crew and they got filming done in about 10 days. There goes the misconception that people with disabilities would hinder production and be unprofessional!

Organic vs staged diversity, what to do next

The tide is slowly turning in regard to disability representation in media and society but not moving fast enough. What can be done about that? First, let’s look at the situation we have now.

Several panelists brought up the idea of staged diversity vs organic or authentic diversity. It’s almost like the media folks are trying to force diversity to prove they have it. I believe (and several panelists said so too) that it’s more about being politically correct and covering their butts than it is about caring about diversity.

“We need to get past this PC thing and (truly be diverse),” RJ said.

The panelists also agreed that many in the disability community realize their passions and their abilities, but now it’s time for more in the able-bodied community to get this idea through their head.

Another part of this topic is whether or not actors who don’t have a disability should portray a character with a disability. Brian Cranston (The Upside) and Dwayne Johnson (Skyscraper) both received a ton of flak for portraying characters with disabilities in movies that came out last year. I was livid when that happened. First of all, actors are just that, actors. They are portraying something other than themselves. Blaming them for that is just dumb.

The second part of that is, let’s be honest. Both actors are big names. The movies, both which portrayed disability well, would not have been made without big names in them. Movies are a business, after all.

I think it’s far more important to work on being more open to having people with disabilities in media.

I agree with what several panelists agreed is true. That we have to continue work for equality but at the same time respect others. We can’t fight for our rights if we don’t respect the rights of others. Yelling and blaming won’t change a thing; in fact, it will only make things worse. We have to continue educating but, more importantly, continuing being who we are and find ways to follow our passions.