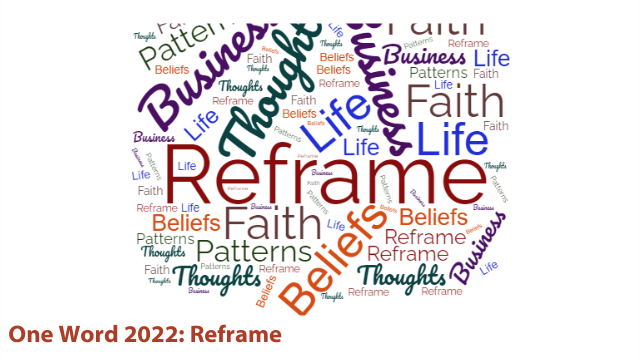 As 2021 drew to a close and 2022 began about six weeks ago, I was about a week behind at work and other projects. As my Facebook memories later indicated, that was pretty good compared to previous years. I think I was simply reacting to how I felt, which was overwhelmed and a bit frazzled.

It hasn’t stopped. That’s why I’m just now getting to writing about my One Word for the year. Part of me is irritated by that, and part of me is choosing to reframe it as “a new year isn’t necessarily based on the calendar.” In my so-called defense, I’ve used this theory before. As someone who was born in December, I tend to use my birthday as my reflection and plan for the future moving forward marker.

Did you notice the word “reframe”? That wasn’t an accident. Reframe is my One Word theme for 2022. It came up a lot in my discussions surrounding the book I’m working on, and I realized that the concept was something I had started doing. The first definition is to place a picture in a different frame. The second definition, my focus, is “frame or express (words or a concept or plan) differently.”

When people think of the concept behind reframing, they usually think of finding the positives in the negative, which is entirely valid. That’s my favorite kind of reframing and most of the visual ideas I was given when I asked for ideas to represent my Word. Here’s the thing….let’s reframe reframing. Did you notice that nothing in the definition says anything about positive vs. negative? It just says to express or look at something in a different way.

So, that’s my goal this year. I want to see situations, ideas, people, and even my relationship with God in a complete way. I say complete because as I look at things from a different perspective, it doesn’t mean it will change my opinions.

That’s when I realized I needed to make my own graphic to represent the most significant areas I’m going to reframe my thinking, so I present my word graphic:

In what ways can you reframe your ideas around life? What is your One Word for 2022?