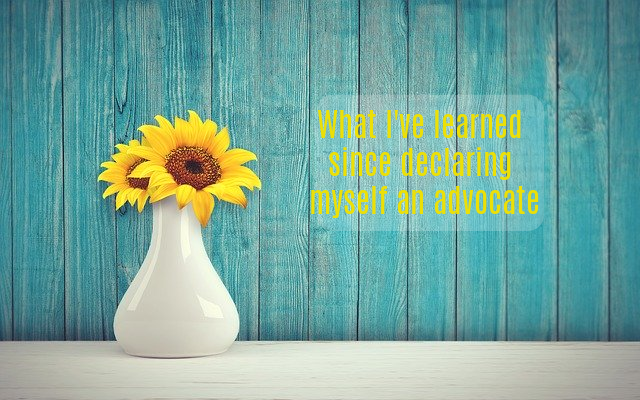 You may remember months ago before this pandemic business that I wrote a blog post talking about how I’ve learned (reluctantly) to call myself an advocate. My main focus is disability access and etiquette, but I also advocate for people of color by sharing their stories and concerns on my various platforms.

This whole advocacy thing has already taught me a good number of lessons and I’m sure more are to come. I’ve seen friends who are advocates and activists face similar struggles, but somehow it’s even more real when you experience it yourself.

The lessons I’m about to share apply to my own situation and truth, but I think people who advocate for other causes will find some common ground here. In no specific order:

Other marginalized groups will not necessarily support you. Be OK with that.

I think I naively assumed that there was a “secret” or unspoken bond between people who face rampant discrimination, but that’s not true. I never consciously had that thought, but it’s the only thing I can come up with how surprised I’ve been at the lack of visible support from friends and others who are members of other marginalized groups.

To be clear, I have had a couple of friends who have been incredibly helpful and generous in raising their voice on behalf of the disabled. I just thought it would be more prevalent. You know, a “rising tides lift all boats” kind of a thing.

As I’ve thought more about it, I’ve realized several things. That expectation was both naive and even a little unfair. If I want to be seen as an individual who doesn’t necessarily toe a certain line, then it only makes sense that I don’t place false or unrealistic expectations on others.

Also, I have to remind myself that it is still important for me to use my voice for others and to not let the lack of support stop me from continuing my education and advocacy.

Civil rights are not special needs.

The term “special needs” seems to be a trigger in the disability community. Some of us recognize that while having equal civil rights is just as important for us as it is others, we recognize that in some cases, extra steps are necessary to make those rights a reality. Others argue that those extra steps aren’t really extra or “special” because they are a right.

I would say I’m between the two arguments. I long for the day when our systems are so adjusted and adapted to providing civil rights and basic human dignity for all that it doesn’t take special steps or extra effort to make that happen.

All that said, people who fight discrimination are not asking for special treatment or extra rights. They are asking (and we shouldn’t have to) for equal rights.

People who argue that the rights are “special” or “extra” are also the types of people who say that “we already have these rights.” You know what? In many cases, that’s true, legally. But in reality, people seeking equal rights experience obstacles blocking them from accessing those rights everywhere they look.

Be it a legal loophole or people who are in charge of protecting those rights going out of their way to make access even harder. Whether it’s hate, ignorance, greed, or even just laziness, that is never OK. And it is what makes those civil rights lack equality in their application.

No one likes a finger wagged in their face. Especially when you’re chewing them out for behavior or beliefs they were raised to have or developed over time from wrong sources.

To be clear, I know that as a marginalized person, it’s not my job to make those who have the specific privilege I don’t have feel better about being educated or taken to task for their discrimination and prejudice. But I’m more about getting the job done and not making enemies unnecessarily. I also believe in grace.

So that’s why I try to use humor and grace when explaining issues related to disability advocacy. Grace, because I know I need it when coming across my own privilege, and humor because I think it helps the message sink in better because the defenses are not up.

I had heard the concept of internalized racism for people of color and internalized ableism for those of us with disabilities but didn’t realize how much-internalized discrimination I held in my head and heart.

Internalized discrimination is when you find yourself having prejudicial or discriminatory thoughts against people in your own “category” or group. For example, I am ashamed to admit that I’m realizing how much internalized ableism I still carry around. Everything from being offended when people treat me as though I have an intellectual disability simply because I’m in a wheelchair, to making excuses for businesses that use the loopholes available to them to not comply with the ADA.

If you don’t toe a certain line, others in your “ranks” will turn on you.

Whew, this is a big one! And I think it’s one of the ones that still makes me incredibly angry. I don’t talk politics much except for with a few trusted people, but most people probably have guessed I’m pretty conservative. My conservative Black friends and friends who are also disabled who lean a bit more conservative are ostracized, belittled, and even threatened by people in our own communities. We are seen as traitors. To a lesser degree, this happens to women who are conservative.

I’ve seen this to also be true for non-political topics from what terminology to use to how we associate with people who are different from us. Needless to say, I find this behavior appalling. Each person has the right to choose how they believe, and being bullied within your own community is the true treacherous behavior.

Your friends will show their true colors and it will hurt.

Most people in my life treat me with at least a basic level of respect and courtesy; otherwise, they wouldn’t be my friend. Of course, there’s always the fringe people who are so condescending that I just tolerate them and don’t consider them a friend.

As I’ve gotten more vocal about discrimination and pointing out problem behavior, I’ve been astounded and, yes, a little hurt at the comments I’ve gotten. People arguing with me, sometimes vehemently, about their rights to do things like use handicap parking without a placard and to use the handicap bathroom stall without a medical need (including urgency…I’m actually pretty lenient on that last issue).

What’s even more alarming to me is when people use Scripture and their faith to back up their prejudice. Heck, I shouldn’t be surprised. So-called Christians have been using God to justify racism for centuries. It’s all a crock and they need to repent. My “favorite” is when Christians share the meme that says, “God created children/people with special needs to teach the rest of us to be better people.” Just, no. Each person was created with an individual goal and God did not create marginalized groups to serve the whims and behavioral needs of the privileged.

Other friends will surprise you with their comprehension and support.

As much as some have surprised me how much they are OK with putting people like me in our own little box in the world, I’ve been beyond blessed by those who have shared my stories, believed when I speak, and even started taking up the cause themselves. I can’t tell you how much it means when people tell me, “I notice this because of you now, and I said something to the manager.” It’s one thing to notice; it’s another thing to use your voice to make a difference.

You have to pick your battles.

Like anything in life, if you become a warrior about every tiny thing, two things happen: You wear yourself out, and people will not take you seriously. I’m learning to address only certain issues for right now and to learn quickly when someone is clearly not willing to listen or consider a viewpoint other than what they already believe. Not my circus, not my clowns.

Self-care is vital for success.

Self-care seems to have become a buzzword, but really all it means is taking care of yourself in body, mind, spirit, and emotions.

Sometimes I find myself so angry and tired of having to explain my worth and how society continues to choose ignorance of that worth. I know that when I start seeing able-bodied society as my enemy and a danger, that I need to step back a bit.

Do the policies and beliefs that are perpetuated put me and others like me at risk? You betcha. But an enemy is a battle opponent that must be destroyed, not a potential ally I want to bring to my side of thinking so we can improve the world for everyone.

For example, I almost stopped talking about disability rights for nearly two months after I was injured on a poorly constructed ramp and then out of respect for the anti-racism movement. I’ve started up again because I don’t believe one group must be silent about their civil rights in deference to another. After all, as the memes going around Facebook say, giving one group their civil rights doesn’t take away from another person’s rights. It’s not pie.

For my fellow advocates on any issue, what have you learned? Please leave a comment!